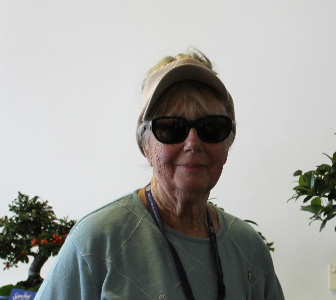 Sydney City Bonsai Club’s founding patron, Dorothy Koreshoff  is both nationally and internationally recognised as a bonsai expert from both an artistic and horticultural perspective.

Here is some background on:

Way back in the early 1940’s living in Brisbane, Dorothy was adamant that she wanted to be an artist rather than going to university. When she was 14 years old, her loving parents eventually allowed her to help our on Saturday’s at a local embroidery factory. Instead of losing interest, Dorothy was intent on working in this field full-time. It was at this factory at the age of 16, that she first encountered Vita, the boss of the factory and who was to become her future husband.

Vita had originally spent much of his youth living in Hailah Province in China as a result of his father was the administrator for the Southern Sector of the Trans Siberian Railway through Manchuria. Their Government house had a beautiful Penging1 collection attended by in-house Chinese gardeners.  After settling in Brisbane his ‘homesick’ Mother prompted Vita in 1930…the year of Dorothy’s birth, to dabble in bonsai in an effort to support his mother’s sadness.

Dorothy and Vita were married in 1949 and by this time Dorothy had also become interested in bonsai. The couple moved toMaroubra, Sydney, with Vita’s early bonsai prior to eventually buying a place at Pagewood.  As the Collection expanded they move to Castle Hill where they continued developing the collection of bonsai.  Then followed years of experimentation with soil mixes, watering, environmental settings and bonsai styling techniques meant that visitors to their home due to extensive media coverage as a new development, were really impressed with their bonsai collection.

After moving to Castle Hill in 1965 they eventually opened their gates to the public on weekends and happily explained and helped anyone who came for advice with their own bonsai. From here their bonsai nursery began. Using their own bonsai as inspiration, they began holding classes at the Koreshoff nursery. Word spread and their reputation grew.

Dorothy explained that the early soil mixes had too much clay in them which meant that the bonsai would not vigorously thrive. Better results were achieved when they moved to a more open mix using washed crushed gravel and choir as a base and fertilised with organic material such as chicken manure.

After many years of experimental refining, the Koreshoff soil mix recommendation is:

Dorothy explained that the above “mix achieves the correct delicate balance between particle size and water tension.” However, along with the science you must also apply the “spirit of bonsai”, that is the reason you do bonsai for your art to be a success.

Dorothy and Vita were part of the 1965 development of the Bonsai Society of Australia which is still in existence today. Dorothy explained, “You should do bonsai because you love it and not for ego purposes.”

From the late sixties Dorothy and Vita began spreading bonsai knowledge freely by holding bonsai subjects in each burgeoning club in a number of suburbs around Sydney. These free subjects were one year in length to ensure enough knowledge was attained to pass on as membership increased. The Eastern Suburbs Bonsai Club formed in 1970 by this method and was the forerunner of our Club, Sydney City Bonsai Club.

The Koreshoff’s promotion of bonsai was not limited to Australia.  Vita had many international connections and both he and Dorothy were the original Australian Directors of Bonsai Clubs International.

Now retired and living overseas, Dorothy’s legacy lives on as Sydney City Bonsai Club members continue to develop their bonsai skills and assist others in doing the same.

1 Penjing (literally “tray scenery“), is the ancient Chinese art of depicting artistically formed trees, other plants, and landscapes in miniature. Their artistic composition captures the spirit of nature and distinguishes them from ordinary potted plants. The Japanese art of bonsai originally derived from the Chinese practice of penjing.
5 Comments Add yours

This site uses Akismet to reduce spam. Learn how your comment data is processed.