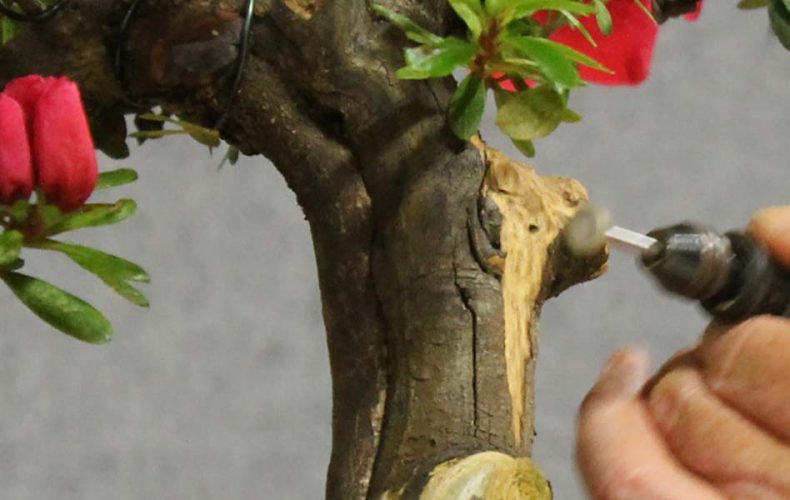 In our October newsletter, Lee has provided an excellent article on the principles of good carving and how to get started. Follow the amazing transformation of her subject, an azalea, where one side of the trunk and branches had died and badly needed to be naturalized.

An ability to carve realistically can serve a bonsai artist well. It can also become an interesting facet to working with bonsai by utilising carving skills on different media to enhance an appearance of age or minimise an unsightly part of the tree.

Major reasons to carve, beyond the sheer fun of it, would be to: 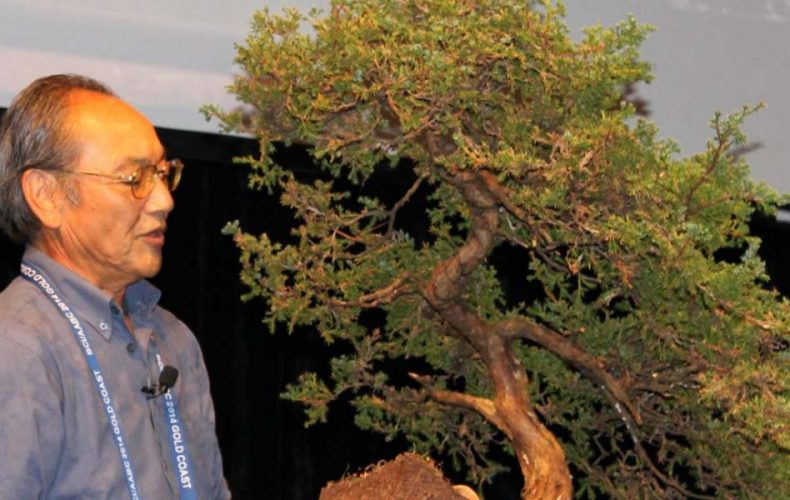 Shinichi-san was born in 1948. He is the second Nakajima generation of Bonsai Masters and operates his own bonsai nursery in Tokyo. He has travelled all around the world to share his bonsai knowledge as the official representative of the Nippon Bonsai Association. He is the former President of “The Nippon Bonsai Growers Group.”

This type of tree is not upright, it normally grows horizontally. Therefore it can become an umbrella shape with a lot of die-back on the inside. With a juniper it is easy to develop branches but getting a good trunk is not easy.

This tree must be raised up. The front part of the tree the trunk is a bit curvy but it would be nice if it had more curves.

Mr Nakajima’s image is a windswept style. In dealing with this type of tree instead of removing all the unwanted branches I can leave some to be used as jin. This will give a very strong impression and age the tree. The tree has a lot of dead branchlets so these are being removed.

I cut a lot of long branches but some I have left for jin. If the branch is alive it is easy to strip off the bark. If it is dead it is much harder. With jinning pliers squeeze around the branch to loosen the bark and then strip it off.

Mr Nakajima prefers to use only a little wire so if the branch is thick or well set he will not wire. He wraps the wire gently around the branch, always gentle so as not to damage the tree.

Junipers tend to have downward growing branches so they are to be raised.

In Japan the wire would be left on for one year so the tree would go through the four seasons. In Australia maybe more than one year for wire is better. It depends on the tree. If the branch goes down it takes longer for the wire to be effective.

This is the tree after its first styling in this new concept. It needs to recover and fill out and then more refinement will be done.

Mr Nakajima approach to restyling this juniper was beautiful to behold and once again great care was taken not to over reduce the foliage so the tree will survive. In its next styling more refinement will be achieved and in two or so years it will be a fine bonsai. 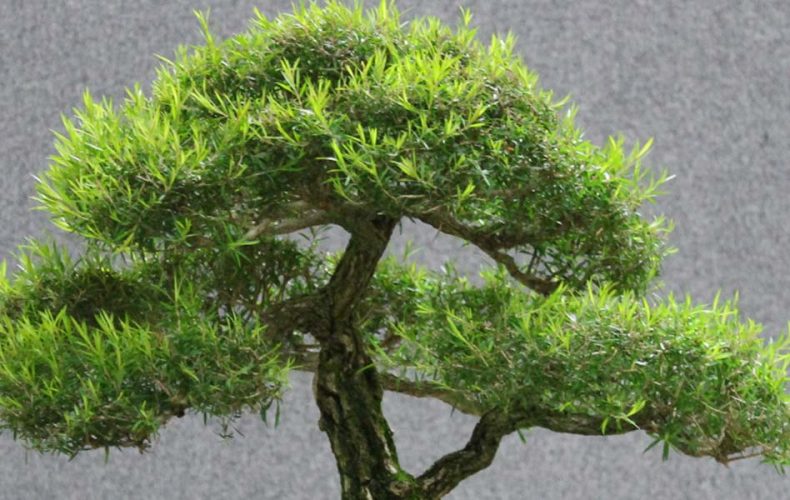 “There is a question that continually crops up in bonsai talks…. Can you bonsai Australian natives?

The answer is a big, fat YES. Aussie natives make fantastic, rewarding bonsai as long as they are treated the way Aussie natives like to be treated”. Lee has been successfully growing Australian native bonsai for many years and spoke at a recent SCBC meeting. The featured image above, a Coastal Tea Tree (Leptospermum laevigatum)is one of Lee’s Australian native bonsai.

Yes, they grow in a sunburned country but a lot of them like a LOT of water and it is often necessary to keep some species in water trays, especially in the summer. Yes, you can go to a nursery and see a native that is in very dry soil and growing. But the question is:-how well is it growing and how well do you want it to grow? If you want the tree to put out a lot of foliage to give you styling options and develop ramification it is preferable to treat it well and that treatment includes very moist soil for a lot of the varieties.

Melaleucas, banksias, callistemon, leptospermum, water gums (Tristaniopsis laurina), baeckea, casuarinas, ficus, and kunzea all like moist soil. Most grow their roots down to the water table and while the area they grow in may appear dry they aren’t.

I keep my melaleucas, baeckea, banksia and water gums in water trays 24/7, only taking them out in periods of heavy rain. The water trays are low so the water just comes above the base of the pot. This has never been detrimental to these species. It can cause moss to develop on the trunk and this has to be removed – which can be a problem in paperbark or heavily fissured bark. It is a delicate balancing act to keep the water up and the moss down but natives as bonsai are worth the effort.

Styling, well Japanese styling is pretty much out for natives. Happily the bonsai world is moving to a more natural styling rather than the seriously stylized shapes that have been popular. It is important to see how the tree grows in its natural habitat and refine the growth so it is artistically realistic. Creating a bonsai ‘a la naturelle’ is not on as our trees tend to have a raggedy growth pattern. Judicious branch selection and pruning can bring that into line with bonsai ideals and the tree’s growth preferences.

It is important to keep in mind when styling that a lot of Australia species have a very fine growth style with open spaces and a sparsity of foliage due to the nature of their environment. When trees are being developed to benching status a more open foliage canopy is the way to go rather than having tightly packed foliage.

Speaking personally, it is very easy to get a solid crown on melaleucas, baeckeas, banksias and leptospermums but lightening and opening up the crown brings a greater feeling of the Australian bush to the tree.

Check out the SCBC July 2014 newsletter for more information on how to care for Australian Native bonsai as well as some common pests and diseases.